For the 48 hours following our time on Mount Sabinyo we couldn’t even mention its name without an involuntary wince of physical and emotional pain. Thankfully, that association lessened over time and I can now look back on our ‘day out’ up the mountain with a sense of pride and achievement.

Mount Sabinyo is a dormant volcano that sits on the border of no less than three countries; Uganda, Rwanda and Democratic Republic of Congo. Its final, yes final, summit lies at 3645m above sea level.

A friend had casually mentioned that we might enjoy climbing it while on holiday as it featured some quirky ladders and was a great mountain day. Her description did not in any way prepare us for what lay ahead.

Things started amiably enough as we met our guide Gloria and our two armed guards at the park entrance. Off we went along fairly flat paths following in the footsteps of elephants that had clearly been recent visitors to this section of Mgahinga Gorilla National Park. We posed for jolly photos in front of our objective for the day. It did look quite high we all noted, but we were assured the path was good and we’d take it “slowly, slowly” by Gloria.

The lower slopes were a tough but enjoyable climb with views over the Congolese border and the other volcanoes in the Virunga mountain chain. The altitude was noticeable as we had set off from around 2200m at the ranger station.

Reaching small shelters and not particularly needing to rest seemed a promising sign and at the first of the three peaks we were all tired but ok. We ate some lunch and Gloria explained to us that ideally we’d reach the top of the third and final peak by around 1pm. The climb from peak one to peak two was where things began to really get interesting; the ladders that had been a novelty on the way to peak one were now essential to move carefully up ever increasingly steep slopes.

Occasionally the mist would clear and we would be reminded just how precarious the hike was becoming. By peak two it was clear we wouldn’t be quite on time for our 1pm turnaround, but Gloria had faith in us and I think secretly quite fancied going to the top as she hadn’t been up for a while. The climb to the final peak was unrelentingly steep, up wooden ladders with handrails. Slow and steady saw us arrive at the third peak just in time for the clouds to part just enough to get a few spectacular, if terrifying views. Unfortunately the wind that had cleared the clouds also bought rain which would accompany us back down 1400m of slippery wooden ladders and paths.

I can only liken the upper reaches of the mountains to a man made scramble; for the descent from the third peak back to the first I would estimate 75% of the steps we took involved hands and feet. The phrase clinging on for dear life was definitely mentioned. 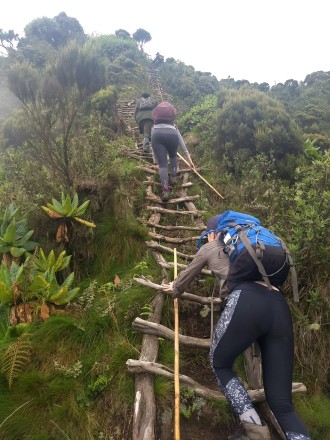 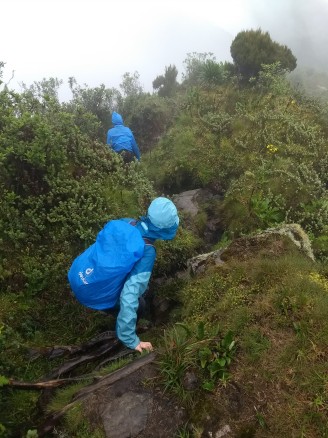 The hike from the first peak back down to civilisation and Herbert, our ever patient, ever waiting driver was a case of mind over matter. I can’t remember the last time I was so mentally and physically exhausted. Every step of the descent required concentration and careful consideration. By the time we reached the flatter ground there was far more thought needed than normal just to put one foot in front of the other!

In all we were on the mountain for 10 and half hours. Very near the end of the walk Gloria proudly told us were the first female group (and only second overall) who had made it to the third peak that year. As we collapsed into the minivan to make our way back to the hotel we couldn’t really describe what had happened up on the mountain but having had time to process it, I genuinely think it was one of the greatest physical achievements of my adult life!

Practicalities: a guide and armed guards (against elephants and other large forest dwelling creatures) are obligatory and need to be arranged before the day you intend to trek. The trekking fee of $80 includes all personnel except porters who are available if you need them at a cost of $15/day. You will need to stay in Kisoro or closer the night before the trek as the meeting time is at 8am. It takes around 40 minutes to drive from Kisoro to the park gates on dirt road. As the route is a there and back route you can see how you get on, the guides are very professional and will be able to advise on whether aiming for the third peak is a realistic goal for the day. We stayed at Travellers Rest Hotel in Kisoro which had a lovely atmosphere, even better our boots got cleaned when we got back!