Time in the ‘proper outdoors’ has been a bit limited of late but my outdoors levels have had a healthy top up over the past few days. I had initially planned a lovely long weekend but through a little mis-organistation from none other than yours truly I found myself with only two days to play with. A short-ish timespan (although actually the same amount of time as a weekend) meant I looked fairly close to home for some mountain time. For me this comes in the form of the Brecon Beacons.

The last visit to the Brecon Beacons for me resulted in perhaps one of the worst walks, weather wise, I have ever been on. A little bit of bad weather doesn’t usually stop me but this walk was pant wettingly wet. Being covered head to toe in waterproofs did very little to stop the onslaught of driving rain through layer upon layer of clothing right to the skin. Why did I put myself through this I hear you ask? Well it was all in the name of charity, The Youth Adventure Trust to be precise who had cunningly devised a figure of eight walk taking in the 10 highest peaks of the area around Pen Y Fan. I think it is fair to say that as a group we probably would have pottered around them in better weather albeit slowly. However with the weather causing some extreme morale issues and visibility resulting in a navigational blip only 7 of the 10 peaks were called upon. This meant unfinished business with the peaks and I set off to finish what I’d started early on a lovely sunny Thursday after a superbly restful night at YHA Brecon Beacons (only 92 minutes from my front door I was delighted to find).

I had planned to take things easy as I was recovering from a nasty chest infection but with every lungful of fresh air and trig point visited I was feeling stronger and stronger. Up hill and down dale was the order of the day as I made a superb circle around ‘The Four Fans’ Fan Frynch (629m), Fan Dringarth (617m), Fan Llia (632m) and finally Fan Fawr (734m). I cannot recommend this loop highly enough, In the whole day I passed three people – all carrying the classic military rucksacks and wearing looks telling me that their main aim of the day was not to enjoy the outstanding natural beauty that was surrounding them.

After completing said loop, powered by a quick nap and some amazing trail snacks from Nakd on top of Fan Fawr I felt good and so decided to nip up some peaks lying the other side of the A470. These were peaks that I had visited before (see above) but had never seen any sort of view from. In my ascent of Corn Du and Pen Y Fan I passed some interesting characters; the lads who were lubricating their walk up with beers in hands and the family who were taking a sleeping child in a pushchair up the slopes, literally dragging the buggy up 400m of ascent, quite different to the hardy soles I’d met less than a mile away on the more wild side of the road.

Which leads me nicely back to the title of this post, this was indeed a walk of two halves, both great for different reasons. I love the peace and quiet of the Fforest Fawr area but as you can see the views from Corn Du and Pen Y Fan are spectacular and have quite rightly make them into the tourist stars they are. 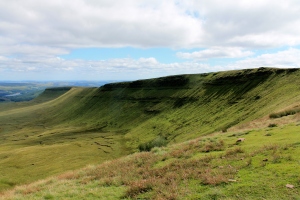 I loved my trip to the Brecons and can’t wait to explore more on future mountain fix mini-trips.

Please get in touch if you want any routecard details of these walks I can happily provide some grid references.